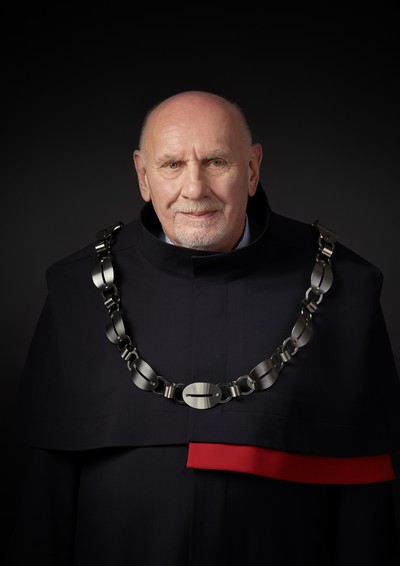 JUDr. Pavel Rychetský (*1943) graduated from the Faculty of Law, Charles University, Prague („Charles Law Faculty“) in 1966 and passed both his doctoral and judicial examinations in 1967. In 1966 he became a judicial trainee at the Municipal Court in Prague; however, due to a criminal prosecution for his protests against political trials, he was forced to leave the court.

He became an assistant professor of Civil Law, Charles Law Faculty, but was forced to leave after the 1968 Soviet occupation. He worked as company lawyer until the end of 1989. In the “Normalization” era, Pavel Rychetský engaged in civic resistance against the totalitarian regime, was a co-founder and one of the first signatories of Charter 77, and published articles in foreign journals and Czech samizdat. He was a member of the Civic Forum and its Council of the Republic.

On 8 January 1990 he was appointed Czech Prosecutor General. From June, 1990 to July, 1992 he was Deputy Prime Minister of the Government of the Czech and Slovak Federal Republic (CSFR) and Chairman of the Government’s Legislative Council, ensuring both the coordination of the CSFR legislative work and the CSFR Government‘s cooperation with the Federal Assembly and the republics‘ governments. As Deputy Prime Minister of the Federal Government he submitted many draft acts to the Federal Assembly (such as, on the Constitutional Court, Referenda, Return of Communist Party Property to the People, the restitution acts, etc.). From 1992 he was an advocate and a lecturer in political science at the International Relations Faculty, Prague College of Economics. He published many professional and popular articles, both nationally and internationally. In 1996–2003 he was a Senator in the Senate, Parliament of the Czech Republic („Senate“), where, until becoming Deputy Prime Minister, he was Chairman of its Constitutional Law Committee and a member of its Mandate and Immunity and Organizational Committees. In 1998–2002 he was Deputy Prime Minister of the Czech Government and Chairman of the Government‘s Legislative Council, Council for National Minorities, Council for Romany Community Affairs, and Council for Research and Development. From 15 July 2002 to 5 August 2003 he again served as Deputy Prime Minister, as well as Minister of Justice and Legislative Council Chairman. In 1990–92 he was President of the Union of Czech Lawyers, and in 1992–98 President of the Board of Trustees of the Foundation for Bohemia. In 1996 he founded the Fund for Citizens of Prácheňsko, focusing on social issues in the region.

On 6 August 2003, after the Czech Senate had given its consent to his appointment, he was appointed as a Justice and the President of the Constitutional Court of the Czech Republic („Constitutional Court“) by President Václav Klaus. President Miloš Zeman reappointed him to both positions for a second ten-year term on 7 August 2013. On 12 July 2005, the President of the French Republic, M. Jacques Chirac, awarded Pavel Rychetský the Légion d´honneur, Officer Class. He is currently Chairman of the Czech Lawyers Union and a member of Scientific Boards of the Faculty of Law of Charles University in Prague, the Faculty of Law of Masaryk University in Brno, and the Faculty of Law of Palacký University in Olomouc. In 2003, the Union of Czech lawyers awarded him with the Silver Medal of Antonín Randa, and ten years later, he received the highest award – the Golden Medal of Antonín Randa for extraordinary credit in development of democracy, jurisprudence and rule of law. In 2015, he was introduced as a new member of the Legal Hall of Fame for exceptional life-long contribution to law. In 2016, he received the František Palacký Award by Palacký University in Olomouc which primarily appreciated his participation in lecturing for Master’s and Ph. D. students at Law School of PU, regular participation in conferences and overall contribution to the prestige of the university and the Czech Republic. In the same year Pavol Jozef Šafárik University in Košice, Slovakia, bestowed the honorary degree doctor honoris causa in the area of law on him for his influence and his being an outstanding personality which contributed to the development of democracy and humanity. On the occasion of its 100th anniversary, the Comenius University in Bratislava, the oldest and largest institution of higher learning in Slovakia, bestowed upon Pavel Rychetský the Grand Gold Medal, the university's highest award, acknowledging his contribution to democracy and rule of law. In 2021, he was awarded the Order of the White Double Cross, the highest decoration of the Slovak Republic. The President of the Slovak Republic Zuzana Čaputová acknowledged the contribution Pavel Rychetský made to the strengthening and fostering of mutual relations between Czech and Slovak Republic, especially in the field of law and constitutional judiciary.