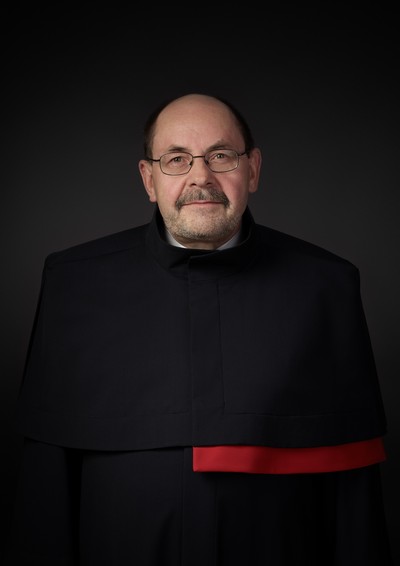 Born in 1954. Studied law 1975–1979. Joined the Institute for Inventions and Discoveries in the year of his graduation, where he worked until March 1983, largely in the Legislative and Legal Department. Produced his written work for his doctorate examination during the course of 1980 (on the review and complaints procedure in the area of inventions and discoveries), which he defended on 2 December 1980 (study field administrative and state law).

In 1983, he took part in selection proceedings for study residencies opened by the then Institute of State Administration, where he was accepted as a study residency participant (for two years). In April 1985, he was taken on as a full-time member of staff as a specialist focusing, first and foremost, on the reformation of local administrative bodies and the legislation in general.
Following a short period of external co-operation with the Office of the President of the Republic (January to June 1990), he worked in the Office of the Federal Assembly from August 1990 to August 1992, initially as legal consultant, later as secretary to the committee of deputies and experts for the preparation of the new constitution of the Czech and Slovak Federal Republic.

In 1991, he was taken on as a part-time member of staff at the Faculty of Law at Charles University on the basis of an open competition (The Department of Administrative Law), where he has worked full-time from August 1992 to the present day. He worked first as a lecturer, and successfully defended his higher doctorate in September 1995 (Ombudsman, protector of the law in the public administration) and was appointed senior lecturer for administrative law and administrative science on 27 November 1995. The Research Board of Charles University ruled on 29 November 2001, on the basis of the defence of his doctorate dissertation, on the conferral of the academic title Doctor of Legal Sciences in the field of administrative law, the state administration and constitutional law. Following professorial proceedings, he was appointed professor for administrative law and administrative science by the President of the Republic on 2 May 2006.

Almost from the beginning of the existence of the Constitutional Court (from November 1993), he worked part-time as Assistant to a Justice at the Constitutional Court (until the death of the justice in 2002). During 2001, he worked with JUDr. Otakar Motejl on the creation of the Office of the Public Defender of Rights – Ombudsman, and later provided this office with expert consultation, particularly in connection with the Annual Report on the Activities of the Public Defender of Rights – Ombudsman. From 2003, he taught part-time at the Faculty of Law at Palacký University in Olomouc (from 2009, as Head of the Department of Administrative Law and Administrative Science).

He was appointed Justice at the Constitutional Court by the President of the Republic on 4 June 2013.