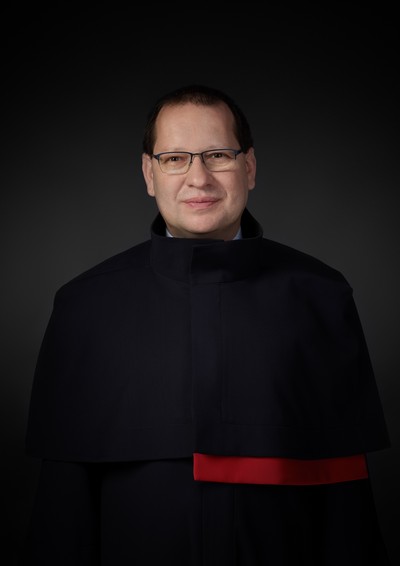 JUDr. Radovan Suchánek, Ph.D. (born in 1972) graduated in 1996 from the Faculty of Law at Charles University in Prague, where he has performed teaching work since 1998 (as a lecturer since the year 2000). He took his doctorate studies at the same faculty, focusing on constitutional law, criminal law, criminology and criminal science. During the course of his post-graduate studies, he also devoted attention to the issue of constitutional law during study residencies at universities in Bern, Tübingen and Linz. In 2001, he defended his dissertation on the subject “The Senate in the Constitutional System of the Czech Republic”. In the years 2001 to 2013, he was a member of the Academic Senate of the Faculty of Law at Charles University, and from 2003 to 2005 was Deputy-chairman of the Legislative Commission of the Council of Higher Education Institutions.

In addition to his teaching activities, he also contributed for many years to the preparation of legal regulations and the drawing up of expert reports for state bodies and local government bodies. In the years 1998 to 2004, he worked as assistant to Members of the Chamber of Deputies of the Czech Parliament (in particular Prof. Zdeněk Jičínský) and as consultant to the Deputy-chair of the Chamber of Deputies. From 2002 to 2004, he was consultant to the Minister of Labour and Social Affairs and the Minister of Health. In the years 2004 to 2006, he held the post of Deputy Minister for Legislation, Inspection and International Affairs and Chair of the Committee of Analysis at the Ministry of Health. He also held other public posts at this time: he was a member of the Government Committee for the European Union, a member of the State Electoral Committee, a member of the Government Council for Human Rights and the Government Council for Equal Opportunities, a member of the administrative board of the General Health Insurance Company of the Czech Republic and chair of the administrative board of the Security Fund. In the years 2010 to 2013, he was advisor to the Deputy-chair of the Senate. From 1999 to 2004 and again from 2006 to 2013, he was also active as a specialist associate of the group of parliamentary deputies from the Czech Social Democratic Party in the area of the law and legislation. During the period of his expert work for Members of Parliament, he contributed to the drafting of many draft amendments for the repealing of laws or individual provisions of laws submitted to the Constitutional Court by groups of deputies or senators.

He has written several dozen specialist articles published in legal periodicals in the Czech Republic and abroad, co-written university textbooks and co-edited anthologies in the fields of constitutional law and governmental studies. In this field he has devoted attention primarily to issues of parliamentarianism, formation of the law, constitutional judiciary, the protection of basic rights and freedoms, direct democracy, state security and selected issues in Czechoslovak constitutional development (e.g. presidential decrees). He has contributed to a number of research projects, e.g. The Constitutional Contexts of the Accession of the Czech Republic to the European Union (1998–1999), Transformation of the Constitutional Systems of the Countries of Central and Eastern Europe (1999–2001), The Constitutional Resolution of Extraordinary Situations and State Security during the Period of European Integration (2002–2004) and Qualitative and Quantitative Transformations to the Legal System at the Beginning of the Third Millennium – Roots, Starting-points and Perspectives (2009–2010). He is also the co-author of commentaries on the Constitution of the Czech Republic and the Charter of Basic Rights and Freedoms. He also publishes in the press (Právo).

He was appointed Justice at the Constitutional Court by President Miloš Zeman on 11 November 2013. He took up this position by swearing his oath on 26 November 2013.