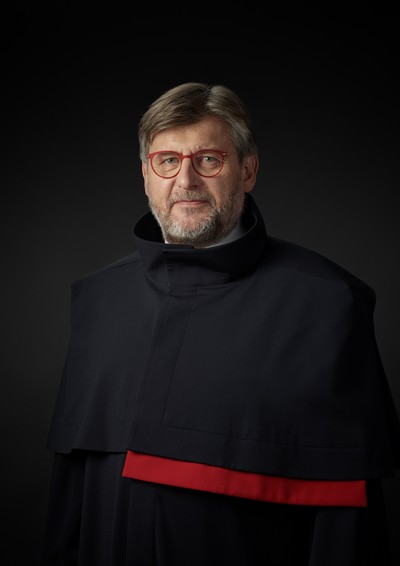 JUDr. David Uhlíř was born on 18 July 1954 in Boskovice, Blansko. He attended grammar school from 1969 to 1973 in Prague 6, in 1975 was enrolled in the Charles University Law Faculty. Following the graduation in 1979, he practised as a trainee attorney in Prague. In 1980 David Uhlíř completed military service and a year later passed his rigorosum examination. Since 1983 he worked as an attorney-at-law, focusing on criminal matters. Despite having been a member of the Czechoslovak Communist Party until 1989, David Uhlíř represented clients that were persecuted on political grounds. In 1990 and 1991 he served as an officer in Prague Municipality on behalf of the Civic Forum (Občanské forum). In 1992 he became the founding partner of Uhlíř, Homola and Partners and he stayed in his law firm until 2014. As a senior lawyer David Uhlíř specialised in civil and business law, he also worked as an interim receiver.

Since 1998 David Uhlíř has been lecturing externally at the Department of Civil law of the Charles University Law Faculty. On regular basis he provides training to trainee attorneys and attorneys-at-law, mainly focusing on the re-enactment of the civil law. Furthermore, he is a member of the civil law examination panel of the Czech Bar Association. He is also a member of l’Union International des Avocats and gives speeches on their annual meetings. David Uhlíř writes in scholarly journals and newspapers on issues revolving around the re-enactment of civil law. He is a co-author of the commentary to the Civil Code published by the Wolters Kluwer. He also critically contributed to the preparation of the new Civil Code, among others he was a member of the Ministry of Justice Commission for the Application of the New Civil Legislation.

In 2009 he was elected a member of Board of the Czech Bar Association and in 2013 a vice-president of the Bar. Apart from his other charitable activities he has been for many years the chair of the Sue Ryder Association, founder of the Domov Sue Ryder in Prague – Michle. David Uhlíř is married and has four children.

On 10 December 2014 David Uhlíř was appointed a constitutional court judge by the President of the Czech Republic.